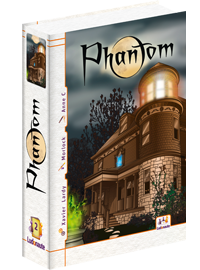 Play the dark soul of Opchanacanough, the Powhatan chief, or John Pott’s and do not let your opponent spoil the wonderful opportunity to finally close the cycle of vengeance.

Haunt the old house in Williamsburg. Invoke the ghosts and win the confrontation. (Too bad for the poor inhabitants of the house!)

In Phantom, the four areas of the house – Garden, Basement, Ground Floor and First Floor – are placed in a line, with the areas divided into two sides. Each player controls Ghosts in half of the house, and he must make Spectres, Souls and other Spirits appear in front of the different areas of the house in order to frighten the Occupants before the other player.

Each turn, a player can play a card – Ghost or Place – in order to increase the Scare level of his corresponding apparition.

Each Place card must be played in front of its corresponding area(s).

The Ghost cards can be played in front of any areas. Each of them creates a special effect.

At the end of a player’s turn, the Scare level of the apparitions in the different areas are compared to the Fear threshold of any Occupants located there. When a player’s Scare level is higher or equal to the Fear threshold of an Occupant who is alone in the corresponding area, this player takes this Occupant and wins the corresponding Victory points. After his turn, the player draws Ghost/Place cards until he has five cards in hand.

Each adult is worth 3 victory points (VPs), each child 2 VPs, the baby 4 VPs, and the Priest adds 1 VP to the last Occupant of the house. As soon as a player has collected 11 VPs, the game ends, with him as the winner. 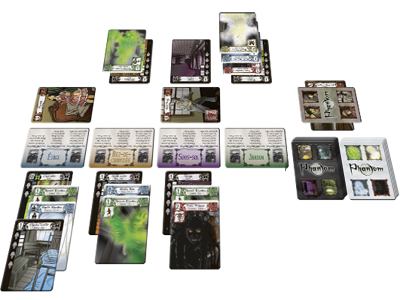