A great surprise has made me smile since this morning. SOS Titanic has been highly recommended by Spiel des Jahres 2014 Jury. This news makes us so happy. We had never considered it possible.
Spiel de Jahres announcement

The German Jury made us a great gift. Thumbs up to Bruno and Ludovic. It brings our game SOS Titanic to light again. Despite the game had great reviews since it was released, it went quite unnoticed among all the released games. So, we are very happy today!
With Lewis & Clark nominee to the French award « As d’Or » and The Little Prince big success, we have to admit that the year 2013 has been a great turning point for Ludonaute. 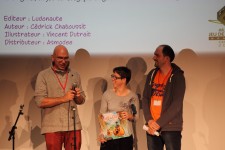 Working on reprints takes a big part of our time. Thus 2014 will see less Ludonaute novelties. We shall release only one game this year: Colt Express designed by Christophe Raimbault. But originality and quality will no doubt characterize this game as well. We do not want to desappoint your expectations :-).

A few weeks after their release in Europe, our two games SOS Titanic and Lewis & Clark are now available in North America: in the US through Game Salute and in Canada through Distribution Dude.