Most of the time, game designers have principles. I remember talking this way to Cedric when working on the first expansion:

“Designing a new character, it is too easy, I just have to find a new ability. If we don’t want a “commercial” expansion, I must work on new mechanisms. We must tell a new story.”

Sometimes harsh reality is the only way to make a stubborn game designer changing his mind. According to a non-official statistic based on my own experience, 82% of the players say when hearing about a new expansion:

“Awesome, is there a new character?”

Given only pink ducks are not changing their mind, the new expansion will have not one but two new characters: Mei a martial art specialist, and the Marshal.

“Isn’t the Marshal already in the base game?”

He is but now a player can embody the Marshal. You can now hit and shoot at the Marshal…

Making the game asymmetric means changing rules to create a unique Marshal’s experience. The Marshal’s deck is different than the others, he can send other Bandits into the Prison Car (the new caboose). A few cards allow him to play two cards in a row.

The Marshal is a good shooter and is ambidextrous. He has got 2 Colts and can shoot at two targets at the same time. Moreover each bullet has got a special ability.

Well, the Marshal looks really handsome. This is not balanced, is it?

He is clearly dangerous, but I wanted to give him approximately the same winning rate than any other Bandit in the game.

The main development difficulty was to find a personal objective for the Marshal. This way he can win over the Bandits. He obviously can’t win by grabbing loots on the train. We tried differents solutions.

During first test sessions, the Marshal tried to protect the loots on the train from the Bandits. It was boring…

Then, the Marshal get 3 special objects he tried to keep with him (a golden star, a love letter and a golden gun). He tried as well to recover his fiance’s pendant stolen by one of the Bandits.

The Marshal was already really cool to play, but we needed something more.

Then I found the solution, I sketched quickly a few cards and it worked from the very first test. The Marshal has got four hidden and random objectives, he must achieve it to win the game. Among these objectives: shoot every bullet from one gun, catch a Bandit, Shoot at every Bandit…

In our last playtests, we gave 5 objectives to the Marshal. He must achieve 4 of them to win the game. The Marshal is even more dangerous and the Bandits try more than ever to block the Marshall’s plans. 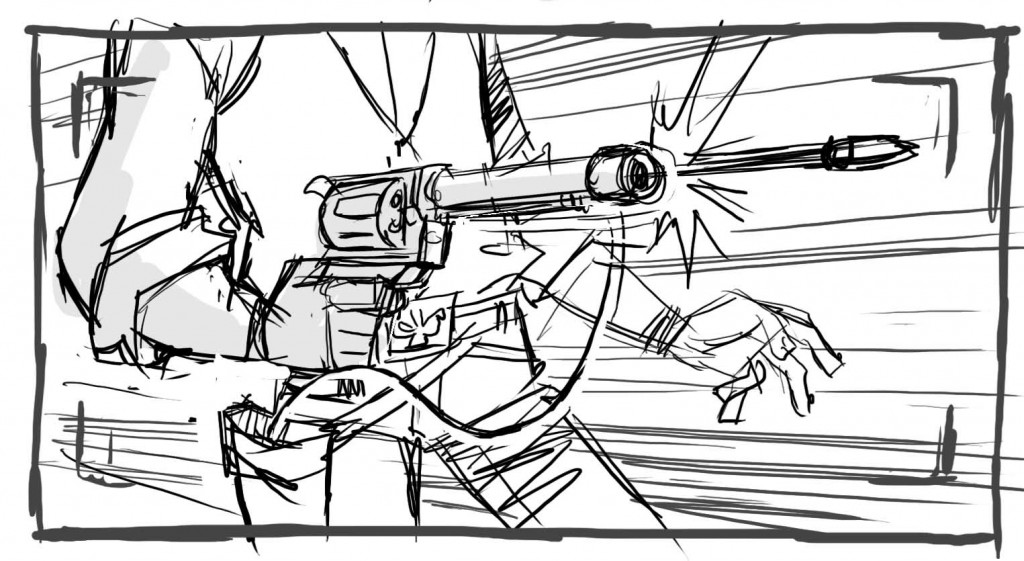 I am happy now.