Each game and each expansion has its own story. Marshal & Prisoners doesn’t make an exception. 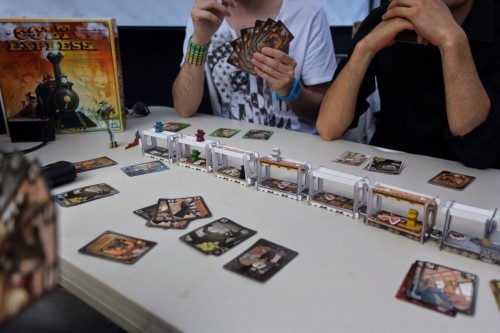 By a sunny day, we are presenting the prototype of Colt Express to gamers. The game is going to be published in October. I am not expecting what Anne-Cecile is going to tell me:

“We have already really good feedbacks for Colt Express from players, shops and our distributor. It would be great if you start working on an expansion.”

My rational me begins:

“But the game is not even released yet!”

My dreamy me goes on:

“You think it could work?”

My childish and fanciful me concludes:

“Ok but only if there is a stagecoach in it!”

Then, I start to put all my ideas in a big file, each intercalary containing a different game rule about a wide range of stuff:

I initially wanted to give the players the tools to master the settings of their game. I wanted them to choose which elements they will add to their games. I’m a huge fan of Escape for this reason.

Then, we spent a lot of time playtesting all these new ideas. I regret that we only kept approximately a quarter of those.

Anyway, I’m happy: players will get this toolbox I was dreaming of to create their own Colt Express experience…

But, following events have shown there were still too much rules remaining…

Cedric is coming back to the booth with a strong headache. He has just tried to explain to the interested players the new expansion contents:

One more time I am not expecting what Cedric is about to say:

“Do you mind if we split these ideas into two smaller expansions? There are definitely too many things for only one!”

My rational me begins:

“Is it a marketing strategy?”

My dreamy me goes on:

“It could allow to create combinations of rules that are matching perfectly together. It would help players to create their own experience.”

My childish and fanciful me concludes:

“Ok but only if there is my stagecoach in the first one!”

And this is how the “Horses & Stagecoach” adventure begins.

Yes, true! I have forgotten, it will be for the next time!

In the next article, you will finally know everything about the second expansion development: Marshal & Prisoners.