Last week-end, the games festival of Saint-Herblain took place, near Nantes. The major gaming event lastedtwo weeks in various locations of the city, and ended with a full gaming week-end.

On this occasion, the Double 6 prize was annouced. The public of the festival gave this award by voting and criticizing the games selection during a couple of months, in dozens of “game points” in the region.

The six games in the running were:
The Little Prince of Antoine Bauza and Bruno Cathala
Gentlemen cambrioleurs of Catherine Dumas, Charles Chevallier and Pascal Pellemans
Tokaïdo of Antoine Bauza
Phantom Society of Hervé Marly and Frédéric Colombier
Pan t’es mort of Lutche
Concept of Alain Rivollet and Gaëtan Beaujannot 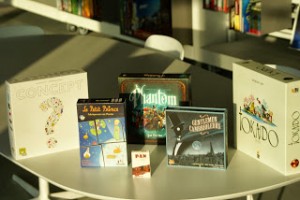 Congrats to the two designersBruno Cathala et Antoine Bauza for this award. And a warm thanks to Bruno, who is the best ambassador for his games ever.