They are back and it makes us happy :-)

We were able to launch the production of 10,000 new copies just before Chinese New Year Eve.  We are glad to tell you today that the containers are on their way to supply stores in Europe and America. Depending on the countries, Lewis & Clark will be available in March 2014.

For this new print run, Lewis & Clark will be available in French, English, German, Spanish, Italian and Polish. You can find the names of our distribution partners in various countries by clicking opposite….. How is this new box?
We decided to change the box size in order to improve the game’s visibilty in stores and fit to the US standards. The new version is a square box (same size as Ticket to Ride boxes). Each copy has one rules booklet in one language depending on the country. 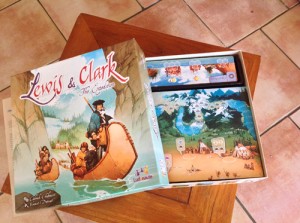 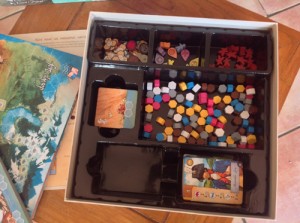 We had to reduce the size of the game board a bit to make it fit to the box and make new punched boards.

We added a plastic tray which allows a better storage of the contents.   The game rules were revised too: new layout and rewriting some confusing points. Eventually, the player Aid cards have been removed. The playing cards will be of better quality. The rest of it is exactly the same as in the first version….. A great thanks to the fans!
For the last three months, the game has been getting some followers and became quite popular. Despite our small first print run, quickly sold out, we got a lot of enthusiastic feedbacks. Tthrough word of mouth, more people got interested. We are happy to learn that the game is nominee for the Golden Geek award as well as for the « As d’or’, the most famous French game ward.