Like every year, we shall attend the « Festival International des Jeux de Cannes » from February 27th to March 2nd. It is an inevitable meeting, our favourite time in the year. We are looking forward to meet you there. At our booth, you can play Crimebox Investigation, SOS Titanic, Lewis & Clark, The Little Prince and Colt Express. We, YOU, are expecting three unforgettable days of fun and games…

Saturday 1st of March, from 10:00 to 1:00 a.m., our booth will move in the North Atlantic, backwards of 100 years in time. The first official tournament of SOS Titanic will take place. You may already know this co-op game designed by Bruno Cathala and Ludovic Maublanc. The goal is to save as many passengers as possible. You are a trained and efficient team or you like co-op games… Then take up the challenge, gather your team of 4 brave seamen, come on board and face five other teams. For each member of the winning team, prize includes a SOS Titanic table cloth and 2 Ludonaute games. To sign up, please email us at contact@ludonaute.fr with the object « Tournoi SOS Titanic de Cannes » giving the name of the 4 members as well as the name of your team .

On Sunday March 2nd, from 10:00 to 11:30 a.m., the little Prince invites you to make the prettiest planet for him. A tournament of The Little Prince – make me a planet will take place with 25 entrants maximum. There will be two rounds: a qualifying round and finals. The Little prince miniatures, table clothes and games are prizes to win. To sign up, please email us at contact@ludonaute.fr with the object « Tournoi Petit Prince de Cannes » giving your name.

Lewis & Clark,’s designer, Cédrick Chaboussit will be present each afternoon from 2:00 to 4:00 p.m.. He is ready to challenge the experienced gamers you are to his own game. Three special games of Lewis & Clark will take place with Cédrick Chaboussit. Those who win him will gain his full respect (and Ludonaute games too). 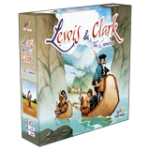 Warning! There are only 9 seats (3 per game). Register by sending us an email at contact@ludonaute.fr with the object « Défi Lewis & Clark » your name and the day you are available.

The three game designers Antoine Bauza, Bruno Cathala and Ludovic Maublanc will be present for a signing session of The Little Prince and SOS titanic on saturday morning from 10:30.

Our upcoming game, that will be released in Fall 2014, is named Colt Express. It is designed by Christophe Raimbault, the author of Sandwich, a game published by Repos Prod. This new game drives you in the Old West in 1890-1900’s. You are outlaws, attacking a train. Your goal: to draw and fire, quicker than the other people and to amass gold. A game lasts about 30 minutes, for 3 up to 6 players. 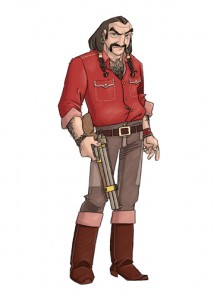